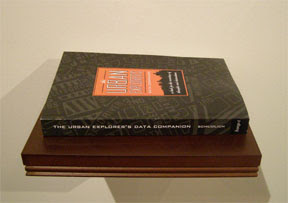 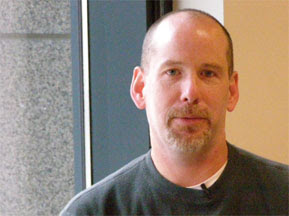 My name is Stephen William Schudlich, I am an adjunct instructor at Wayne State University and at College for Creative Studies. I teach illustration and graphic design.

What I do, is I create maps, charts, installations, that are constructed from data that I go out and I collect when I walk and I drive around the city of Detroit. Social sort of material that I see, things that speak to what’s going on, what’s not going on, different sort of information like that. And a lot of times these pieces are put together in a very clinical, scientific way in a chart as a means to make it accessible to people to look at.

The reason I do it, I think, largely comes from a historical notion. As a child, I can remember driving around with my father, going from here to there, east side to west side, whatever the case may be. I’m a fourth generation Detroiter. And so we spent a lot of time within the city of Detroit. We would drive around and my dad would always take what was called the “long way.” The long way always facilitated a visual candy store of things to see. Whether it were people on the street, great architectural buildings, the ball park, Eastern Market, Michigan Avenue, all that sort of stuff. And so the long way facilitated that. And a lot of that notion still exists in why I do what I do. I enjoy those trips, I enjoy driving through the city of Detroit, through its urban areas, through its blight-affected, ghetto sort of communities, and I like to look at that stuff. I have this fascination with these places. And I like to record the visual stories and the material that I see there to the extent that I take my son with me on these trips now. He’s only three. He probably won’t remember a lot of it. He does remember, however, when he sees a house that’s broken, he will tell me, “Dad, that house is broken.” And so he has a real keen awareness of that. He also says that, “They need to fix that house.” My son is probably one of the smartest people in the car on those trips. I walk around a lot, I drive around a lot, I look at this information, and I want to make it available to people. I’m not an activist, I don’t have a political agenda, but I do enjoy the idea that perhaps some of these charts and installations can be put before people who may have a voice or may have the ability to affect a positive change in a community that clearly needs so much of it today. And so that’s a little bit of the driving force also of why I do what I do. But I truly believe that I would do it anyway. I would do it if I was doing it for pay. I would do it no matter what. It’s in me historically, it’s in me genetically. I have this, this fascination with this city that I was raised in, and that my ancestors were raised in and had such a foothold in. And so I think that that probably sums up the best way I can, why I do what I do.
Posted by Nick Sousanis at 1:53 PM

This was the most enlightening interview I have EVER read. Mr. Steve, you are a genius.

cool insight. i usually fear for my life when i find myself in an unfamiliar part of detroit. yet if i were ever to move to a different state, i would still proudly identify myself with the city of detroit, blight and all.