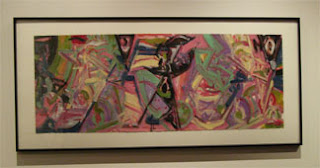 Which, 2004
Oil painting on primed paper 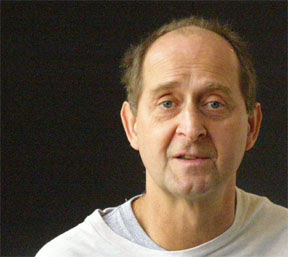 My name’s Jim Cogswell. Most of what I do is influenced by my background as a painter. About 14 years ago I began making images that were based on an anthropomorphic alphabet. I used the alphabet just as a kind of system for making more complex images in sequences. First I thought of them individually, then I began putting them together in a sequence from A to Z as if I were putting the whole alphabet up. A while later I realized that these were the building blocks for language. And I was willing to use them in strings to create words, but I didn’t want just any word. So I picked words that were entirely dependent on their context. Words like “this,” “that,” “the,” “for,” some linguists call these words “shifters.” I like that, because I think that whatever we make as artists is entirely dependent on context and that is a physical context as well as a conceptual context.

Why do I do what I do? I’ve gravitated towards this way of working because it allows me to think through my body, for thinking through my whole being. It allows me to be a maker. I can pick up my work anytime I need to – I have a ready starting point. It is a form of reflecting physically on the components of my life. I grew up overseas as a child of missionary parents in Japan. I grew up quite accustomed to living in an environment that I didn’t completely understand linguistically or culturally. I was comfortable there. So there’s part of me that is quite comfortable living without a ready explanation and I sometimes worry, I sometimes think that that may not be characteristic of everybody that I’m around. For example, a ready analogy for what I do is, I love music, I listen to music often while I work in the studio alone. But I’m much more interested in what happens to me through my absorption of musical structures than I am by what people are saying in lyrics. I get real tired of lyrics really fast, and it becomes an obstruction to something that I feel is much more profound. So I listen to music that’s instrumental primarily or music in languages that I don’t understand. That’s probably the best analogy for what I make as art, is making music in languages that can’t be directly understood.
Posted by Nick Sousanis at 1:42 PM