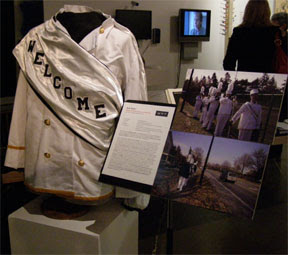 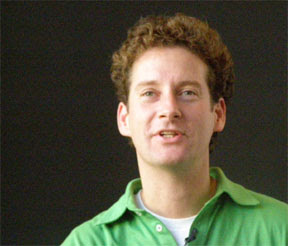 I’m Nick Tobier, and I do things in public. I also do things in private, but maybe we won’t talk about that. I say I do public performances, that’s how I’ve been describing my work recently. Most often I describe it as Situational, not Situationist, but Situational. That is if there’s a situation, I’ll try and do something to disrupt it, and if there’s no situation maybe I’ll make one up.

Why do I do these things? Why do I act out in public? I think, for the most part, I’m aware of this time when I used to go to my studio all the time, and I’d walk through New York where I grew up, where I was living, and I’d see all these amazing things in the street and I’d open this big door with a padlock and I’d go inside my studio and I’d make wood things. Wood sculptures that had absolutely nothing to do with what I was walking through, but was what I did in the studio. What I realized at a certain point, was that I had a studio life that was completely separate from the life around me that was the parts of it that were engaged by walking through the city and wandering and getting to know people and getting lost. So I gave up my studio. Which I always think, was either the bravest thing or the stupidest thing. And I just started to work on the street and being responsive to whatever I came up against. The first thing I remembered doing was finding myself trying to cross the street, the snows had melted, and there was this enormous puddle that actually had become sort of a lake. I watched people walk to the middle of the block so that they could get around the puddle. So I made a bridge to help people cross puddles. The projects that I do now I think are an outgrowth of those things that were utilitarian. They seemed to have an urgency and a purpose, that is, I could make something that would affect someone’s day. And they were structural. Like the bus stop I made in Detroit, it provided a comfort or service. But I also do things that are services of different sorts, things that are more celebratory. Choreographed sequence for a group worker/dancers in a wading pool in Toronto. Because I think those things are utilitarian as well. I think that celebration is something that we have less and less of in everyday life. If I can bring something to the public realm that is celebratory then that does become part of everyday life. And I think that sort of in a nutshell what I’d like to do is open the possibility that everyday life can be quite extraordinary if someone is willing to step out of daily routine and do something that seems at first eccentric but maybe after a while you can’t live without it. Maybe you can.
Posted by Nick Sousanis at 1:55 PM

Hello Nick,
I am at present trying to put together a programme of short videos and digital media for a exhibition on sustainability in Mumbai, India. More information below. If you have some work that you can share with us, please do send it to us asap. we need it by 28 Feb.
Thanks,
regards,
Monica Bhasin
*****
CALL FOR DIGITAL MEDIA

This international event is aimed at creating awareness on sustainability and simultaneously offers a platform for interaction for professionals and activists from various fields and the general public. The events are centered around the interests of students, educationists and practicing professional designers, engaged in any manner with a broad vision of sustainability and aims to address the need to reach a wider audience and create greater awareness. The event has been designed to be lively, interactive and thought provoking and will provide great opportunity to interact with stalwarts in the field of sustainable development and related practices, connect with thought leaders and listen to visions by
outstanding speakers.

The event comprises many exhibition opportunities and provides a wide platform for sustainability-related work done by individuals and institutions over the years. We are organizing public installations along with film/video screenings for the same. The films will be used for screenings within the exhibition and as part of a larger compilation to be exhibited in public spaces across Mumbai. We expect to exhibit work that deals with a wide variety of themes within a broad ambit of sustainability, especially culturally specific endeavours, and will appreciate work that is visually stimulating and engaging in its depiction.

If you have relevant work in this area, we would like to include it after a preliminary viewing. There is no restriction and the work could span any visual representation from prints to photographs, film/video/animation or work in any other digital media.

PLEASE FORWARD US YOUR WORK AS A CD/DVD IN ANY VIEWABLE FORMAT KEEPING IN MIND THE FACT THAT IT MUST BE SUITABLE FOR PROJECTION/PUBLICATION, HENCE NEEDS TO BE A GOOD QUALITY PRINT (AVI/MPEG/DVD FOR VIDEO AND IMAGES IN 300 DPI JPEG OR TIFF).

For film/video submission, please include –

This information will be used for inclusion in the exhibition and related publicity material with your permission.

PLEASE SEND US YOUR WORK BEFORE 28TH FEBRUARY 2009.

You could send us your work at the following address:

For an overview of the event please visit http://www.inaplanetofourown.net

For all queries please email us at sustainability.iit@gmail.com