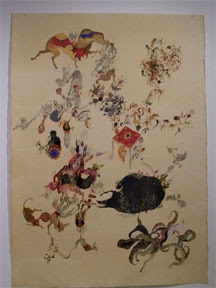 As a Persian artist, two of the greatest influences in my life were the Iranian revolution and the resulting war with Iraq. The war and its memories inspired most of the work I have done in the past few years. The conflict with Iraq began when I was 6 years old. It was on an afternoon in September when Iraqis attacked Iranian air bases at Tehran’s major airport. After that day the dominant memories of my childhood were the daily city bombings and their results: the handicapped children, the sobbing and screaming of the families who lost their loved ones, the black fabrics that appeared all over the city as a sign of national mourning. The eight-years of war between Iran and Iraq ended without a definitive outcome when Iran accepted the UN Security Council's resolution.
Years later, after I moved to the United States, the US/Iraq war erupted. It brought back many dark childhood memories, and made me want to communicate about this personal history through my art. I started researching the concept of war and how it impacts society, from the emotional damage suffered by individuals to economic hardship to a sense of instability and uncertainty that hangs over all aspects of life. I embarked on a new body of work of large-scale watercolor painting using narrative images and heroic stories from Islamic mythology and Koran. The stories in my paintings are primarily told through the use of animal forms and mythological figures. Mixing and matching these images that I find in Persian and Indian miniature paintings allows me to both use their iconic status while also creating a new identity and stories for them. These images serve as useful symbol given the associated stories and narratives they are a part of. Using these mythological figures, combining and modifying them, and presenting them in the context of our modern life is a way for me to question the role of governments, politicians and figures in authority. My work traverses the boundary between painting and drawing. While I am comfortable with oils and acrylics, the primary medium I work in is watercolor. The flowing, imprecise nature of water helps me to convey the concept of instability. At the level of materials, I use Persian tea and saffron to put a colored and scented wash down on the paper I use before working. I then layer up the surface with watercolors, ink washes, intermittently mixing and layering with graphite and/or mechanical pencils. As my work can be seen through the lens of my cultural identity as an Iranian born, I have integrated the materials, thematic and iconography of both my Persian heritage and contemporary western art practices.
(note, this statement replaces an earlier interview transcript)
Posted by Nick Sousanis at 1:35 PM

I know Shiva...I remember her very well from childhood...back in Tehran...we were classmate for quite a while....we used to go to eachother houses...we even used to go to the same school to get prepared for national exam in order to get accepted in university...I've been looking for her and I always found some related web sites...I admire her art works. I'm hoping Shiva would remember me... in fact, I don't live too far away just a couple of states down in Virgina. Wish you luck Shiva!
Elham Ilbagi

I love Shiva's paintings. She is such a great artist. Her paintings are being shown all over the world. She just had a very successful show in London. I have never met her in person but I just purchased one of her paintings from her gallery in NYC...really expensive but it's worth it.
Nancy