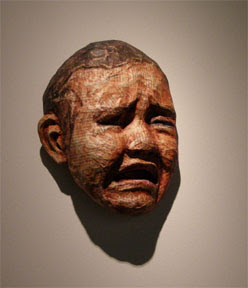 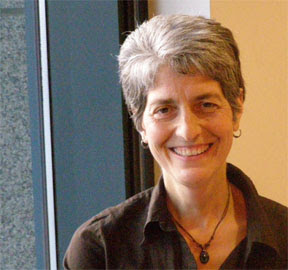 I’m Kathleen Rashid. My work kind of reflects two sides of myself. I’m a painter on the one hand, I also make very large puppets that I used in street demonstrations, usually to protest war, injustice generally. I don’t often consider that my art per se, that’s not what I exhibit, it’s not really what I’m known for as an artist. The mask that I’m showing reflects more that side that has to deal with the political realities that we live in right now. I made the mask that I’m exhibiting specifically to protest the war in Iraq, Afghanistan, the occupation in Palestine, all the wars and violence in the world right now that we’re complicit in as citizens of the United States, that we’re forced to be complicit in. It invades every realm of life, so it invades the realm of my artmaking. I’m usually, like I say, known as a painter. I love to just examine the world as it is, the world that’s overlooked usually. I think that the best thing that art can do is to extend first the perception of the artist herself, and then hopefully that extends into the viewing audience. It becomes a narrower issue, when we’re dealing with issues of war. It brings us down to very narrow awarenesses that have to be made. That’s why it’s more uncomfortable and complicated for me to deal with political issues in my art. I feel like part of me is shrinking and I feel like the message has to shrink. That’s the way that war makes us smaller as human beings. It’s a difficult thing to describe. That’s an issue that I struggle with a lot. How much the art that I make should reflect the political realities, and how much they are able to transcend them. Right now my art is not able to transcend the political realities around me and that’s an impoverishment of art.
Posted by Nick Sousanis at 1:52 PM