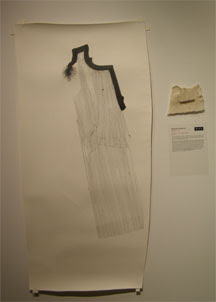 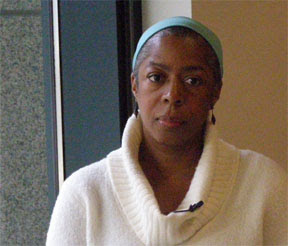 I’m Elizabeth Youngblood. I am an artist and a designer. As an artist, what I do is draw and also weave, and I think of my weavings in a lot of ways as drawing, at least the ones I’m doing currently. I also have a background of doing clay, as an undergrad. So, all three of those are very much in my sphere. I make a living as a graphic designer, and that’s print design.

Why I do what I do? I think I began making things because it was a conversation between me and the adults that were around me. I learned to sew with my mother and I enjoyed it. I probably enjoyed the companionship as much as anything else. It was fun to learn things, better still it was fun to have the thing after it was made. I also worked with my uncle in his woodshop and I was very comfortable by the time I was a young teenager with running power tools and I always enjoyed again what resulted from the making process. Same thing with clay in high school. I still remember the enjoyment of the first time I filled a mug that I had made with water and it actually worked. So I think that initially as a young person, it was the conversation between myself and an adult. Now making is real interesting to me because it’s more of a conversation with myself and with the materials. And then, if I’m lucky and it gets out there into the real world, it’s a conversation with the people who get it, who appreciate it and understand it, and to whom the work speaks for some reason.
Posted by Nick Sousanis at 1:57 PM

Hi Liz, I was looking at some U Mich alumni articles and noticed your name and that you are back in Detroit. I really like the work you are doing from the images on the gallery website. I have often wondered what had happened to you. Great to see the work. Get in touch if you would like.
Eve

I was thrilled to find your blog. Daine and I were driving down the street aind out of the blue, I said I wonder what happened to Elizabeth Youngblood. Did a googl search and there you were. How are you. Would love to connect. My email is regrey1@earthlink.net

I was thrilled to find your blog. Daine and I were driving down the street aind out of the blue, I said I wonder what happened to Elizabeth Youngblood. Did a googl search and there you were. How are you. Would love to connect. My email is regrey1@earthlink.net