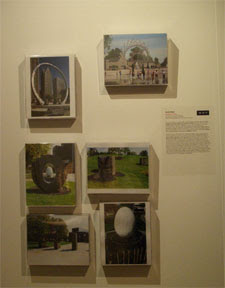 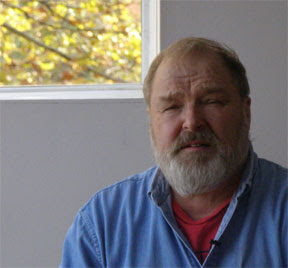 My name is David Barr, I’m a creative worker. One thing I believe is that the way I live my life, there’s making love and there’s making art, everything else is waiting. The reason I do what I do is that I probably wouldn’t want to live if I couldn’t do it. I don’t find the same fulfillment out of anything except those things. I suppose I’m categorized as a sculptor, and I’m more that than I am a two-dimensional artist. But I really think of myself these days as a creative worker. I relate to workers, I like the idea of working, I like the idea of approaching my life with a creative attitude rather than as a simple, mechanical kind of process. So I try to understand what’s around me, I try to make visible that which has been invisible and I find tremendous fulfillment in doing that.

I thought I’d just give a little example of how I might go about doing a project. I was approached by Pfizer Pharmaceutical in Ann Arbor to do a project for their research and development lab there. The way I first started to think about it, I didn’t have an idea that I wanted to drop off on their campus, I wanted to build it organically from the inside out. So I began asking questions of the chemists and the people there: “What do you do here, what is the research and development, how does it come about?” What struck me was, that the ideas are, you’re searching for something, you may find it, you may not find it, or you may find something that’s useful that you didn’t expect to find. So I approached the project and ended up doing 10 different clusters of granite pieces that are around the campus, these are pretty big pieces, and engraved on them different chemical elements. And really tried to have each of these clusters express a different aspect of investigation and development of something. So when you walked around the campus you thought you were following a sort of development, and you thought maybe out of these granite boulders was going to emerge a sphere. But in the end what you found was what emerged was an egg. And this egg form is up closer to the buildings and it’s surrounded by a Rumi poem which says, “and the nature of reality is this: it is hidden, it is hidden, it is hidden.” Which I felt is precisely what happens both for artists, scientists, anybody trying to do legitimate creative work, it is hidden even to them – it has to emerge out of the process.
Posted by Nick Sousanis at 1:40 PM

Hey uncle david, it's ashley... kevin's daughter just was googling some stuff and thought about Barr to google and there you were :) just wanted to leave you a comment

hope to see you all soon

HA!! Mr. David Barr!! This is so ironic. I was just sitting here on my back porch down here in sunny Florida thinking of topics for my blog. I thought of doing a "My Heros" blog about the people who have inspired me most. Your name was the first to come to mind. So I ran in here and Googled you. I found this blog. It is so good to see you after all these years. See what effect you have had on people! Let's see...you were my very first art professor back in a--hhhhuh, cough, cough 1973? My, my, how time flies. You must have done something right. I am STILL an artist!!! LOL LOL
Sincerely,
:-)
Sheree Rensel

Hello David,
I am an art librarian at the U of Manitoba in Winnipeg, Canada and I am documenting the public art on campus. We have a piece that has only "Barr '67" on it.


I am hoping you could shed more light on this and say that it is your piece!!!!????
thanks in advance,
Liv Valmestad

This is Jason Villareal. We haven't spoken in over 10 years. I regret that.

I can't seem to find any way to contact you except for this blog? I hope this finds you.

I am having my FIRST show this weekend along with 8-10 other artist in Grand Rapids, MI. I'm reminded of you as this approaches. You're the reason this is happening.